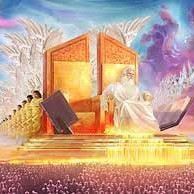 In the legal system, a court will rule on a case and give their verdict, but that verdict can be appealed to a higher court that has more AUTHORITY and can overrule what the lower court decided. Finally, the SUPREME Court has the HIGHEST authority, and it can overrule ANY lower court decision.

In today’s Scripture, the psalmist is saying that the enemies that come against YOU —the fear, the lack, the sickness, the addiction—are NOT permanent. Our God is called the MOST HIGH God. He IS the Supreme Court all by HIMSELF. God is about to rule in your favor. He’s about to OVERRULE some things. You’re about to get a NEW verdict. God’s about to turn some things AROUND. You’re going to see a BREAKTHROUGH in your health. Doors are going to open BIGGER than you’ve IMAGINED. God’s going to bring divine CONNECTIONS, the right PEOPLE. He’s going to THRUST you to a NEW level of your destiny.